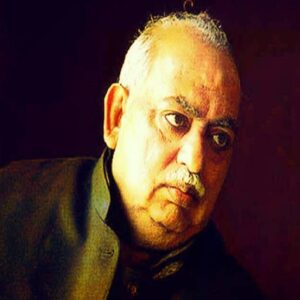 Munawwar Rana.He was born in the sleepy town of Rae Bareli in Uttar Pradesh in 1952. The notable feature of his poetry is that he used the genre of Ghazal to eulogize Mother. Rana’s poetry has also been published in Hindi, Urdu, Bengali and Gurumukhi.Rana is known to be a sensitive poet who uses Hindi and Awadhi words in the couplets. Sahitya Akademi Award for Urdu Literature 2014. Vishisht Rituraj Samman Award under ‘Parampara Kavita Parv 2012

Munawwar Rana is a contemporary Urdu and Hindi poet. In the peaceful town of Rae Bareli in Uttar Pradesh, he was born in 1952. During the Partition, most of his close relatives, including his aunts and grandmother, went over the border to Pakistan. His poetry is significant for the fact that he used the Ghazal genre to eulogise Mother, which is unusual because Ghazal was regarded a literary form in which lovers conversed with one another. Rana has also written a memoir in addition to his poetry book. Rana’s poetry has been published in Hindi, Urdu, Bengali, and Gurumukhi, among other languages. Rana is a sensitive poet who writes in both Hindi and Awadhi in his couplets. He avoids flowery language and chaste Urdu in his couplets, which is one of the reasons he is successful in non-Urdu poetic meets as well.

Munnawar Rana published his poetry not only in Urdu but also in Hindi and Bengali. He performs poetry on stage as well.
Apart from his poetry collection, Rana has also penned a memoir. One recent performance was at Culrav, the cultrural event of NIT Allahabad, in 2012.

Munawwar has produced a large number of ghazals, which have been published in various editions by various publications. In comparison to his contemporaries in the Hindustani literary sphere, he has a distinct writing style (mainly of Hindi and Urdu). In contrast to other poets, he places Mother at the centre of his love in the majority of his Shers.